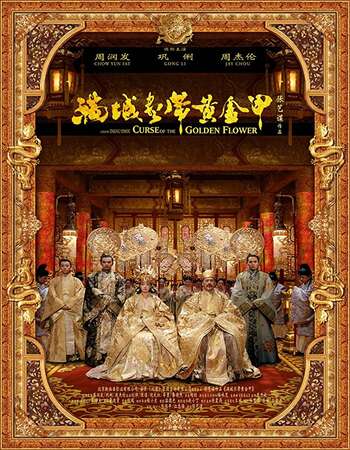 Story: China, Later Tang Dynasty, 10th Century. On the eve of the Chong Yang Festival, golden flowers fill the Imperial Palace. The Emperor (Chow Yun Fat) returns unexpectedly with his second son, Prince Jai (Jay Chou). His pretext is to celebrate the holiday with his family, but given the chilled relations between the Emperor and the ailing Empress (Gong Li), this seems disingenuous. For many years, the Empress and Crown Prince Wan (Liu Ye), her stepson, have had an illicit liaison. Feeling trapped, Prince Wan dreams of escaping the palace with his secret love Chan (Li Man), the Imperial Doctor’s daughter. Meanwhile, Prince Jai, the faithful son, grows worried over the Empress’s health and her obsession with golden chrysanthemums. Could she be headed down an ominous path? The Emperor harbors equally clandestine plans; the Imperial Doctor (Ni Dahong) is the only one privy to his machinations. When the Emperor senses a looming threat, he relocates the doctor’s family from the Palace to a …