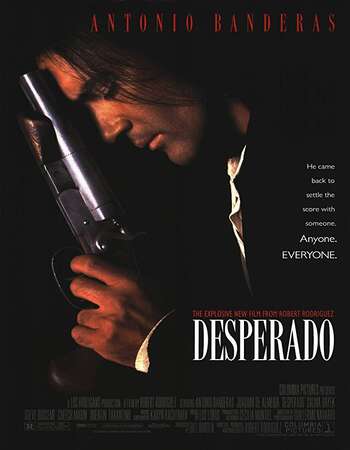 Story: Director Robert Rodriguez picks up where his successful independent debut El Mariachi left off with this slam-bang South of the Border action saga. Bucho (Joaquim DeAlmeida) is a wealthy but casually bloodthirsty drug kingpin who rules a seedy Mexican border town. Bucho and his men make the mistake of angering El Mariachi (Antonio Banderas), a former musician who now carries an arsenal in his guitar case. Bucho was responsible for the death of El Mariachi’s girlfriend and put a bullet through his fretting hand, making him unable to play the guitar. Bent on revenge, the musician-turned-killing machine arrives in town to put Bucho out of business, though he finds few allies except for Carolina (Salma Hayek), who runs a bookstore that doesn’t seem to attract many readers. Desperado features supporting performances from Cheech Marin as a cynical bartender, Steve Buscemi as the cantina patron who sets up the story, and Quentin Tarantino as a man with a really terrible joke to tell.